In addition to the production of pure silicone prefabricated parts, we use our competitive edge in multi-component production for an extremely complex composite technology: 2k injection molding with liquid silicone. The foundation stone was first laid for our current showpiece discipline in 2010 where sophisticated thermoplastic parts with metal inserts and LSR seals for the automotive industry are created in a highly automated process today.

In addition to the constantly high energy consumption, the handling of the extremely hot components also represents a major challenge. 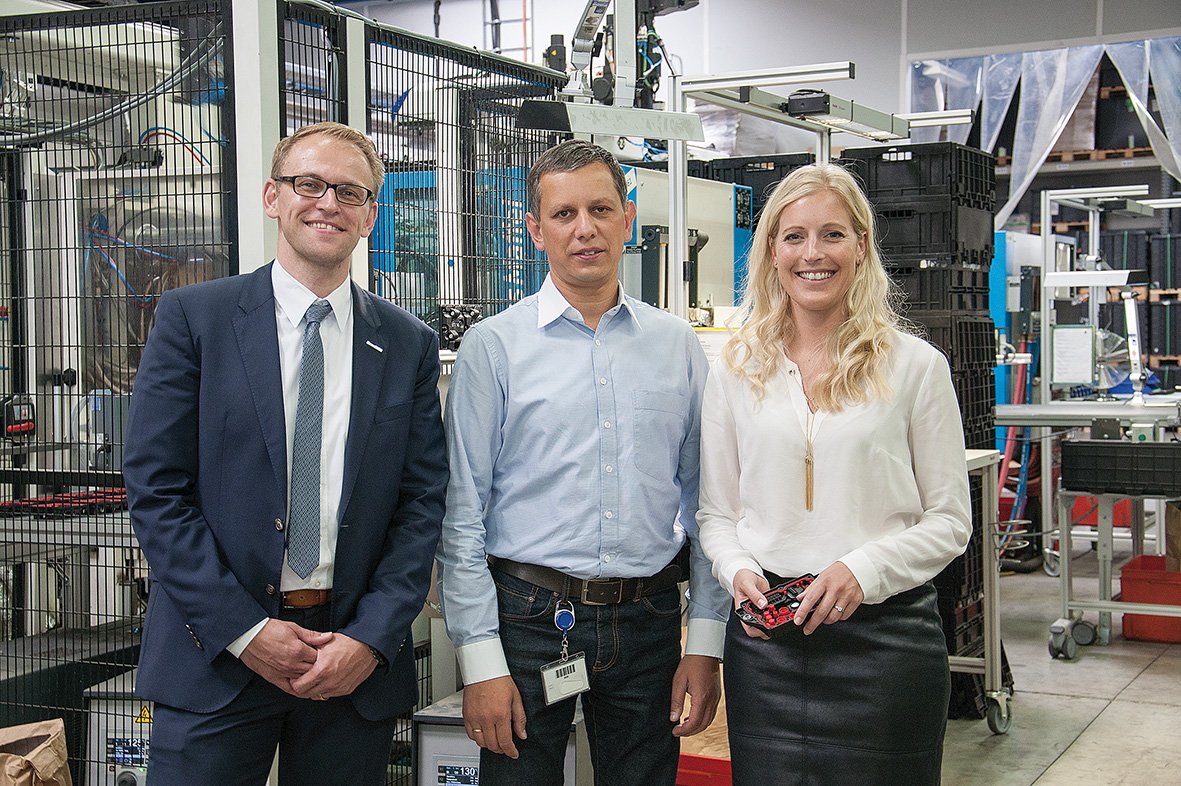 A pilot project as the initial spark for decades of development work.

We developed a concept back in 2010 to create a multi-lip silicone seal that was to be integrated into a control board made of glass-fiber-reinforced PA 6 in close cooperation with the Munich-based manufacturer of machines Krauss Maffei. Initially, isolated tests were carried out on a 1k machine, which the first sample parts of the hard components were produced on. In the second step, the adhesion-modified LSR seal was sprayed on directly on site at Krauss Maffei. It was found that the different temperatures and adhesion buildups led to significant problems. We therefore had to rethink the process.

Based on our experience with transfer technology and hard-hard injection molding, we decided to use the more complex turntable technology in a 2k process. This enabled us to avoid the classic warping problems and at the same time take advantage of the high temperature of the thermoplastic part, which in turn had a positive effect on adhesion and LSR cross-linking. The component remains in the cavity, reducing shrinkage and significantly shortening the cycle times even more. 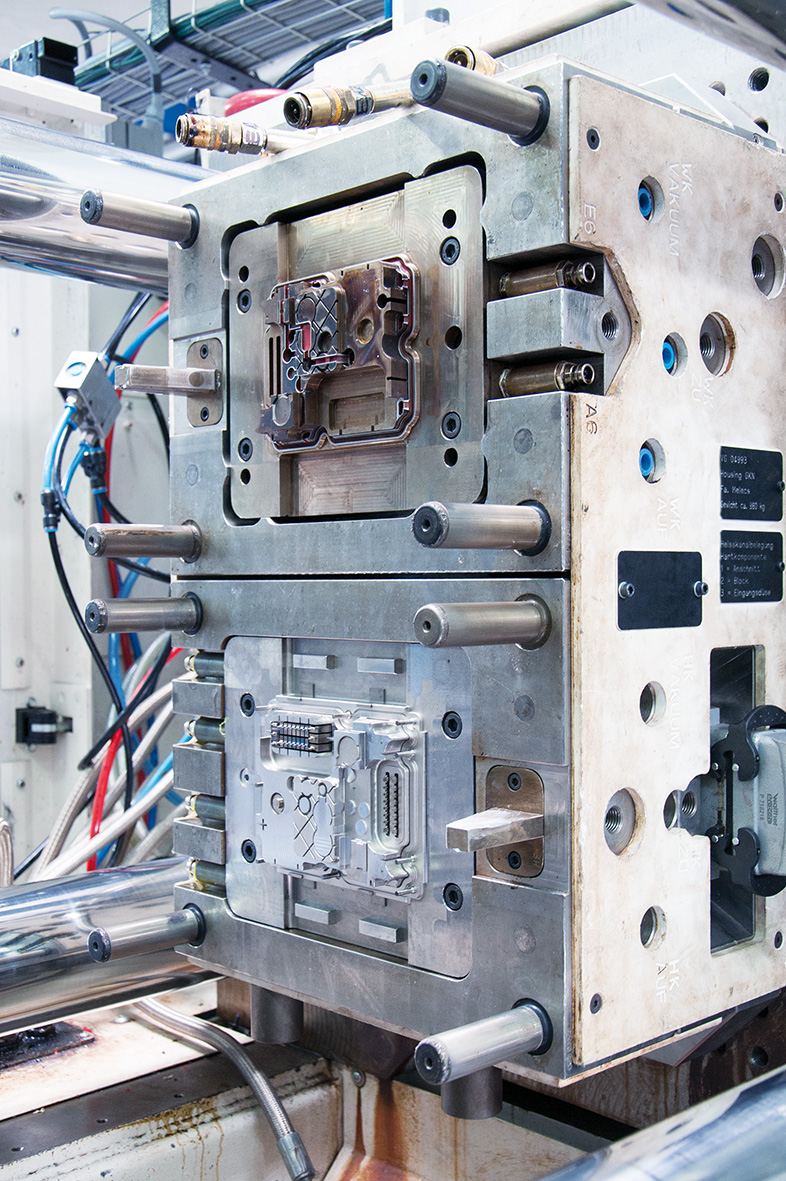 Thermal separation is the key.

The temperature difference between the thermoplastic cavity at approx. 120 to 140 °C and the tool temperature when injecting the silicone component at approx. 200 °C poses a major challenge for hard-soft injection molding. Special expertise is required here for the turntable design and media supply to optimally control the heat balance. The hot and cold media in the turntable constantly require high sealing levels. In addition, there is the enormous thermal stress on the material resulting from the contrasting expansion of the different temperature ranges.

The combination of silicone and thermoplastic in the 2k process also directs our focus to the different cycle times of both materials. Here it is necessary to reduce the significantly longer cross-linking time of LSR and adapt it to the thermoplastic cycle time. This is the only way we can actually exploit the advantages of 2k production and make the process efficient.

Originally, the minimum cross-linking times for an LSR elastosil with a hardness of 50 Shore A were 120 to 180 seconds, according to the manufacturer. Thanks to special tool designs and close-contour temperature control with liquid media, we are able to manufacture parts with just 50 to 60 seconds cycle time with equally good cross-linking. A clear advantage in terms of process efficiency. 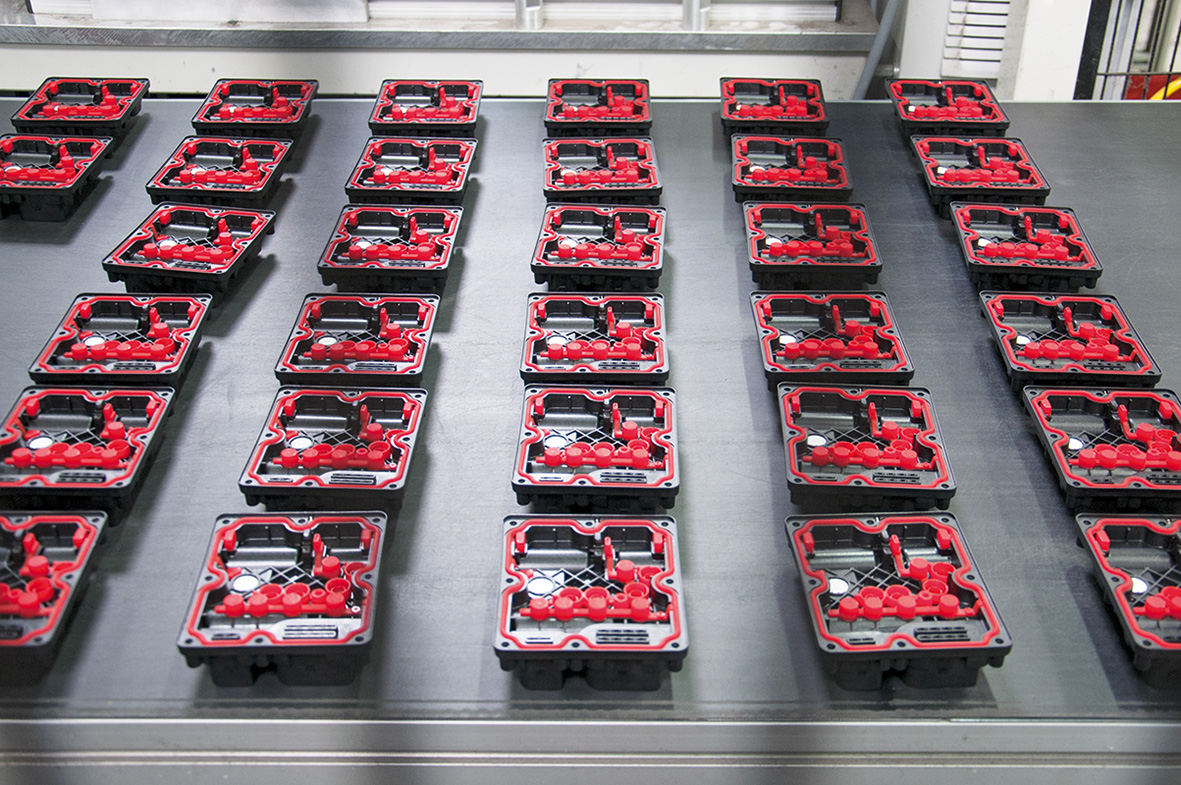 The silicone’s adhesion properties are always influenced by the polyamide’s material variations. It is extremely difficult to determine this in advance as part of the incoming inspection. Even slight deviations in ink metering can lead to viscosity changes. Although these can be somewhat compensated for by the process parameters, it often takes a lot of experience and the necessary “play” to adjust the batch differences so that there is process stability across batches.

Today we are able to produce complex automotive housing parts with a glass fiber content of 30% and LSR with a hardness of 50 Shore A equipped with metal inserts and membranes, in a production run of 10,000 units per day in a fully automated process.

We are a leading system supplier and development partner for plastic, metal and silicone components with our company site in Helmbrechts.